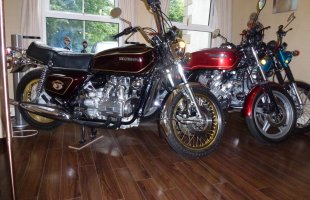 Never had oil . Brake fluid or Battery in it

Has only 1. 8 mile on from Factory & been moved about over the last 37 Years

Was displayed in a U. S.  Honda Dealer's House for 29 Years

My Living Room the last 8 Years

Up for sale is my 1979 Honda CBX. It has 69 miles on it since a complete nut and bolt restoration. This bike speaks for itself through the pictures. but I'll try to describe it to the best of my ability. I've owned this bike for 17 years and I am the second owner. When I bought this bike it had 8000 miles on it and it was very nice and well maintained. I had 4 other bikes(not CBX's) at the time. I rode the bike for a while and decided to do a complete restoration on it after learning a lot about them and finding out how collectible they are. In the pictures you will see a 2 inch compressed stack of bin labels that came with all the original NOS Honda parts that I purchased for the bike over the 7 year period that the restoration took to complete. That stack is about 13000. 00 dollars in parts at wholesale prices pre 2001. The total money spent including the Honda parts. chroming. paint and powdercoating is about 19000. 00 dollars of pre 2001 money. All the work except for the paint. chrome. powdercoating . and machine shop work was done by me. I am a professional mechanic by trade. The head was done in California by Richard Sims of ex Sims and Rhom fame who had many right ups in Sport Rider magazine. The cylinder boring was done by Paul Gast at Fast by Gast. It is easier to explain what is old. not what is new. The old parts include the engine cases. cylinder head. cylinder. and external engine parts. the frame the wheels and the bodywork. The engine was powdercoated as were the wheels. The bodywork was refinished using House of Color materials by Franco Hajok. a local renowned painter. All painted parts were glass beaded down to bare metal or plastic before being recoated with an etching primer. It is paint perfection. All stripes and decals are under the clear coat. All internal engine parts except for the transmission and the crankshaft were replaced. The rods are Falicon knife edge rods. the pistons are Arias forged pistons. The valves. chains. guides. seals. sprockets cam joints. all internal carburetor parts. intake manifolds. etc. etc. are all original new Honda. The sport control kit. headlight with all its associated hardware is all NOS Honda. The fork tubes. caliper pistons. rubber parts. brake hoses. brake pads. and anything else you can think of including the front fork springs are all Honda new. The main harness is original but most of the subharnesses have been replaced with new parts from Honda. The coils are new. as are the instruments along with all the instrument housing components. I could go on and on to the point where its boring. The rear swingarm is a NOS CALFAB unit that is beautiful. It really enhances the way the bike handles. I also have the original swingarm that will go to the buyer.   It can be seen in the pictures that some external parts of the engine were chromed. This was my decision due to my taste. I think that with a small investment it can be changed back by the buyer if it is not to their liking. plus those parts can be easily sold. I won't talk anymore about what is new. It's almost everything. If I missed something and you want to know if it is new. just ask me and I will answer. Even the engine bolts were purchased new from Honda. grab bar. drive sprockets. etc. etc. HM469 exhaust from a 1980 model that can be seen in the pictures that I bought from Sunrise Honda in New York about 16 years ago. It is like new with some barely noticeable marks from handling it over the years. They told me that they took it off of a 1980 that they sold new in 1983 because the customer wanted an aftermarket exhaust.  The CBX 1000I Bought in 2011 & has been in my living sinceThere is 69 miles on it & is as NEW 1969 Honda CB750 SandCastThis bike was Built by Vic worldmotorcylesThis is the same guy that built the sandcast in Honda Museum Japan (check their website ) Not a lot to say only the bike looks like the day it left the honda factoryeverything is as newBeen in my living room the last 6 years.  In no rush to sell & only selling to buy a BentleyAsking price for all 3 motorbikes £60. 00.  I will consider offers for the bikes indivdually FinallyIf you are reading this add . you will know how rare. & how hard to find motorbikesLike these They are 100% genuine & if you would like to see before you buyI am Happy to pick you up from Airport & leave you back.  Any Question please Email  Please Please No stupid offers Thanks Have Been ask for Single Bike price Guide   GL 1000 Goldwing LTD £ 25. 00 CBX 1000  £ 18. 00CB 750 Sand Cast £25. 00
❮ Prev Honda motorcycleNext Honda motorcycle ❯ 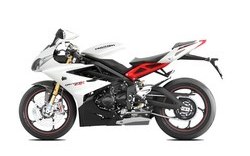