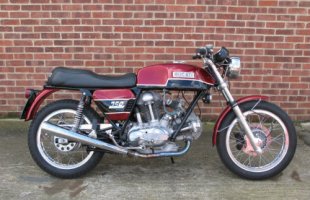 Introduced in 1971 the 750 GT was the first V twin engine Ducati and the brain child of legendary designer Fabio Taglioni. This 1974 model is one of the last produced and is a super rare 'round case' electric start model of which only some 329 are know to have been built. Few of these bike are known have survived in original condition as many were used as donors to make race replica's and as such this is good opportunity for any serious Ducati collector.
This fine motorcycle has been part of a collection in Spain and was recently imported to the UK. Having just had a major service. the bike is fitted with a new clutch. points. condensers and coils. The valve clearances have been adjusted. the Dellorto carbs stripped. cleaned and balanced. Now reregistered in the UK with a UK V5C logbook. it has a MoT until March 2014 and will supplied with a Ducati dating certificate. a bill for the recent work and original registration documents. This is a matching number bike in very good cosmetic order and excellent running condition. not often seen this is a very exotic Ducati and one not to be missed. For more info and pictures go to www. godinbanks. com or you can follow us on Facebook. 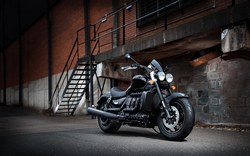