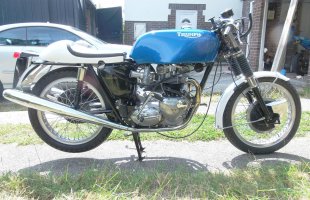 1966 triumph thruxton bonneville ex race bike . GFU 81D frame number f6881 engine number t120 du40155 . the frame number is the cast number of the frame and was registered with this from new . i have the original green log book. The first owner was  R L ward motorcycles . Dont know if they raced it . When i got this bike it had not been used for 30 years and i got it from a private museum . The bike was a full race bike with lots of works parts on it . i have the pictures of when i first got it . let me know if you want me to send them to you .  the engine is full thruxton spec with special cams and 3" tappets and tappet blocks . the head has been rebuild and i saw that the con rods had been polished . the gear box is a close ratio one . the wheels are 19" mint borrani flanged alloy rims with new stainless steel spokes and new bearings  wm2 front and wm3 at the back . original works 5 gallon aluminium fuel tank with monza filler cap repainted and lackered . Original works fibreglass single seat painted and lackerd . Original works thruxton exhaust silencers not copys which have been rechormed . powder coated frame . Twin leading shoe front brake with racing linnings air scoop and cooling holes . totally rebuild front forks with new stansions. srings. bushes. up to race spec. New hagon rear shocks . alloy mudguards newly painted . oil tank is the correct scallop out type. other side panel is metal scallop out type too . The clutch cover has a quick cable change modification which i have never seen on any other racing unit bonneville . Rear brake has racing linnings and is drilled for cooling . the bike comes with a new sprint manufacturing fairing and fitting brackets and race nose and light bubble nose . the fairing has been fitted once to the bike . i will try and find the pictures of this . The bike was a race bike when i got it but i wanted to put it back on the road as a fast classic road bike . i will find the pictures of when i got it . i have some of the bits to finish this bike but i know it needs a rev counter. head light and to be wired up . it will run a battery less system . selling as spare or repair as i have no time to finish it myself . will make a special bike when finished . i may part ex on another bike . Lots of money spent on this . The last pictures show the bike with the new fairing on it and when i first got it before i started to restore it .  the pictures of the bike in the red were taken of the bike in 1977 . can deliver for a charge  07813261558 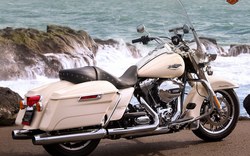