Seller notes: Front mudguard has 2 chips, I will include a replacement mudguard in the sale. The bike is covered in Ventureguard so immaculate other than these two chips. 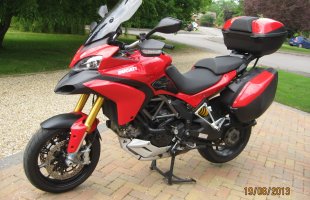 Ducati MultiStrada S Touring model - 2011
Mileage 6000 (in use so might go up) Panniers. heated grips. centre stand - as standard with touring model Full service history. Plus 1 extra service performed by main dealership last summer.
All manuals included + toolkit 12 months road tax  £2000 of extras included with the bike.
This has the electronic Ohlin's suspension with 4 engine maps / power modes.
Tyre condition - Front brand new. the back was replaced about 2000 miles ago.
Genuine Ducati accessories included in the sale:
Ducati top box  Termignoni carbon exhaust end can (original will be included) Electronic petrol cap (operated by the electronic key/ignition. Original will be included) Touring tinted screen. This is slightly bigger than the standard screen. but make a big difference. (original included). Ducati carbon look tank protector against jacket zip Ducati carbon look tank protectors for riders knee's
Other manufacturer accessories included in the sale:
Touratech engine guard Sat-Nav mount for Garmin 660. wired into the bike loom by the Ducati main dealer. The Garmin 660 SatNav unit is not included in the sale. only the mount. however it could be added to the sale by negotiation. BikeTrac by Road Angel - Will require the registration to be changed to the new owner Palmer Products head shield (to protect the front cylinder head) Full VentureGuard kit applied to the bike and panniers. to protect the paintwork Optimate charger socket wired onto the battery
The bike lives in a garage. plugged into an optimate charger when not in use.  It has been maintained regardless of cost to keep it in the best possible condition. 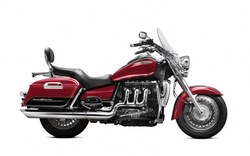