History of Triumph began more than a century ago, when in 1880 an emigrant from Germany Siegfried Bettmann began trading in the UK sewing machines and bicycles.

Later, in 1885, together with another German Moritz Schulte, they founded Bettmann & Co and started selling bicycles and motorcycles under the brand Triumph. The first motorcycle was called simply - № 1 (No. 1). Since the first model, the company known as a manufacturer of high-quality, reliable motorcycles. Over time, it began to pay attention not only ordinary citizens but also the British military, which made the company orders for motorcycles.

The main event for the company is considered to be a successful launch in 1937, the production of Triumph Speed Twin - motorcycle which for many years set the direction for many manufacturers.

In 1940, the Triumph factory in Coventry was the purpose of the bombing by German aircraft, and only two years later came to restore the production of motorcycles. In the U.S., meanwhile, the brand Triumph sounded stronger and by 1950, the year the company has become very popular.

Luck followed the company until 1970, when the struggle for the European market entered Japanese manufacturers. On the background of victories in motorcycle competitions there is a drop in sales.

In 1983, the company acquired a British investor John Bloor, who has spent a large sum on the reorganization of production and the creation of a new model line Triumph. After a while the new plant was built, stuffed with modern technology, on which the company had high hopes. In 1990, an updated range of Triumph motorcycles has breathed new life into the brand.

Now Triumph Motorcycles Ltd. is part of Bloor Holdings, which is owned by businessman John Bloor. Sales of Triumph motorcycles is about 40,000 - 45,000 units per year. 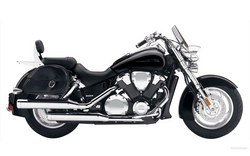