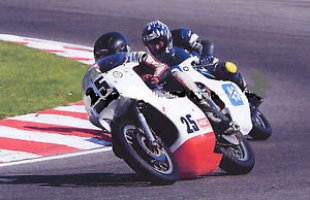 John Caffrey produced this machine in 1978 to race in the formula one series world championships. The frame was pictured as part of a feature "John Caffrey Frame Maker". in Classic Racer Summer 1984 page 57. where it is pictured on Johns lawn in its new nickel plated state. The frame gives a long wheelbase which John found gave excellent stability in the Isle of Man and similar circuits such as the Ulster GP. A Kawasaki type steering damper is fitted. John was one of Joey Dunlops racing friends and they met up at places like Estonia - if you look at the Joey DVD John is there. John still makes frames in his Pembtokeshire workshop.

John sold the machine in 1981 to Colin McVittie who raced it for a while and he then took the engine out and the bike was stored somewhere until approx. 1999 when it was part restored. I bought it in 2003 and continued the restoration by commissioning a Z1000 motor from Phil Lovett. This is a 1105cc engine with a compression ratio of 10. 8:1 over Wiseco pistons. shim-under cam buckets. one-piece stainless valves. steel spring retainers and AP springs. Camshaft is Joy special that can be re-set to make the engine fire as a 4-piston twin. ie 1&4 together and 2&3 together. Magic to ride but heavy on camchain gear. The crank is standard A2 with polished conrods.  The inlet tracts have been opened and polished to 33mm. The exhaust ports have been tuned to give improved flow. The five speed gearbox has standard ratios and the gears have been undercut by Thomas Keating Ltd who also did the Beneton gearboxes for F1 cars.  The engine power was found to be around 114BHP on Mistral dyno and a bit less on the Gibson dyno when it was first run as a 'twin'. This motor has just been re-built and only waiting for me to dial in the cams as a 'four' again.

As soon as the above engine was finished and running a second engine was commissioned. This is a Mk2 Z1000 and is mainly similar in spec to the above but has bigger valves and ports. a Kent full race cam and compression ratio is 11. 18:1. The crankshaft has been lightened and balanced in 2010 and a Dippo close ratio gear set added. The clutch in both engines is a hybrid of ST1000 aluminium basket and friction plates matched to the original Z1000 steel plates. centre and pressure plate.  This engine has been measured at over 120 BHP on the Bob Farnham dyno. The engine oil used is Rock Syn4 and is cooled by a radiator in the front of the fairing through a letter box. Both engines wear the Z1 classic round style cam cover.

The machine has CR33 special Keihin round slide carburettors with short stubs and short bellmouths.  There are alternative sets of needles and jets. The exhaust fitted is a Tony Cook system. There is also a second Tony Cook exhaust system that has slightly different outlet and header dimensions but I have found little noticeable difference between them apart from the second being quieter but different needles are required. Both systems push over stubs on the head and are retained by springs.

The ignition system is Boyer Bransden Micro Power and it has been found that the battery will last a whole weekend of practise and 4 races. There is a spare ignition box.

The wheels are Boranni rims with Avon race tyres and stainless steel spokes. The front end is Rickman. ie Rickman twin disk hub in Betor 38mm forks. The rear hub is also Rickman. The rear sprockets are R1 so readily available. The aluminium tank and seat are the originals from 1978. The fairing is a P&M from Bill Roberts but this has been cut and shut to give more clearance. There is also an oil catch tray tailor made for running without fairing but as yet not fitted. The tachometer is the original Krober overhauled by Peter Champness. The brakes are Lockheed 2 piston calipers of classic design. Handlebar levers are a choice of standard or dog-leg. There are two stands. a rear roll off and a side prop stand. If you go to the I. O. M TT website you can see John Caffrey's results on this Kawasaki when raced under sponsorship as the Keeston Kawasaki. My results are much less spectacular although I have usually finished but had some good lower order racing. This bike would not be suitable for a rider of relatively short stature.

The machine has been used irregularly in CRMC events for some years although not the last 2 due to family commitments. It was last used at Mallory Park practise in 2012 and was parked up following that as I didn't get another chance. I will be using this bike in 2014 if not sold.