Seller notes: The Machine is generally in good order there might be the odd chip here and there. There is a bit of crrossion on the front mudguard supports 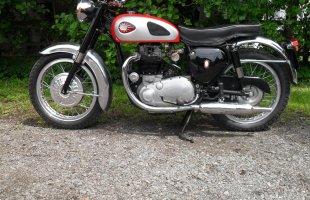 Here we have a BSA 1961 650cc Super Rocket. When I bought the bike I  was told that it had been subjected to a full restoration over a period from 1998-2006.  The 4 July 2006  was when I purchased the Bike. and have owned ever since. It has spent most of its time stored in my garage.  The mileage I covered over this period of time was 468 miles. I know this as the  as when I received the bike the speed was zero.  The reason for the little use was I had another bike and several classic cars to ride and drive and basically I only ride the bikes in the summer when it is warm and dry.  When I took the bike for its first MOT I met a guy who specialised in Super Rockets and he thought the standard of restoration was very good.  The magneto was refurbished and the battery replaced other than that its as I bought it.  She normally is quite easy to start and runs rides very well. Due to lack of use and space then I have to sell her on. As you can see from the pics she looks the part.  The present MOT has expired  so when the bike is sold it will have a new MOT.  Should you wish to view the bike or ask questions etc then please ring me on 07831800882. Thanks for looking.