Seller notes: This bike is mint and must be seen better than new. 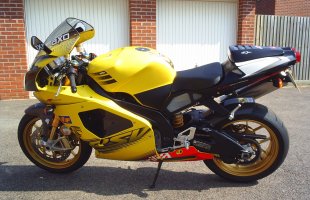 Hi up for for sale is my much loved 2003 rsvr.
It is in yellow and black colours and in my opinion is the best colour they did on this model. Its the last of the old models and best models i think? It has a black frame and swinging arm. gold oz racing whees. adial capiiers by brembo. lins shock and steering damper and front forks and much carbon fibre as standard. Also had an uprated gear box on the last 2003 models.
I bought this bike in feb 08 and it has only done about 300 miles since i have had it. Just after buying the bike i had back surgery and its been in the garage ever since will not get to use it anymore as back pain is still bad. It has been motd and taxed over the time but over the last year i have not bothered but will tax and mot if someone wants it. It has an up to date service history with the bike. It also has a meta 357t alarm and immobiliser fitted to the bike with optimate lead attached to the battery. It has a remus road legal titanuim end can and i also have the original too. lso has a carbon fibre yoke. and clock surround . Petrol cap and gold anodised brake covers. Last year it had a new gold did chain which has never seen the road yet. lso has a k and n air filter and smaller 16 tooth front spocket for better pull away. It also has an uprated side stand which leans the bike further over a problem on this model also have the original too. Since i have had the bike it is been taken down and cleaned like new with any rusty screws replaced with new originals. heels are like new and the pearl yellow bodywork you can see your face in it. I have spent hours cleaning and much money on this bike was going to keep it and put in bike shows. I must say anyone who is interested they must come to see it to relise the condition its in. i am very fussy about my bikes and have had rd500's in the past that where like new thats what i am like. I have front and rear stands that will go with the bike and an aprilia bike cover. lso original handbook and haynes manual. Will be sad to see it go its my pride and joy. just looking at it seems a shame? I hope it goes to someone who can get the use out of it. r store it away as a future show piece? As soon will be very collectable and a future classic.
Any questions feel free to call me anyone who is serious about condition off their bikes and want proberly the best rsvr 2003 model around? I am sure anyone who is serious about this bike would buy it. if they see it they will want it.
its beautiful and all original. The price reflects its condition so no offers please. Just fitted a new uprated yuasa battery 14 amp hr to the bike and is ready to go.