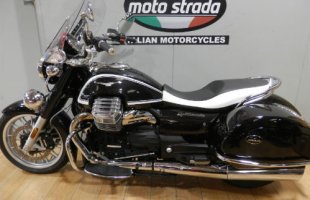 Save a small fortune on this now available demonstrator model Moto Guzzi .
As new condition
A sense of adventure and luxury. in perfectly balanced harmony. These essential characteristics allow boundless horizons to be faced with bold spirit and maximum comfort. The technical solutions. the new mechanical components and the innovative but faithful design make the California 1400 Touring the flagship of Gran Turismo. Pure reference for the entire category.
The Touring is the California in its most classic expression. destined for great travelers. thanks to a level of comfort. aerodynamic protection and load capacity which only a Moto Guzzi can offer.
Equipped with a “Patrol” windscreen. supplementary chrome-plated headlights. 35 litre panniers. engine and pannier guard kit. the Touring is a lavishly chromed and technological “tourer” which. powered by the largest V-twin ever seen before in Europe. is able to trot along all day with a thrilling sound and. if necessary. leave behind any vehicle on two or four wheels.
The sensory indulgence continues with the engine off. outside your favorite bar or in your garage at home. where you can explore it in its smallest detail. Here there is plenty of choice. including engine and construction details or technological devices: among these. for the first time in its category. the possibility to choose the preferred engine response between Touring. Sport and Rain modes. or select the cruise control which. together with the anti-theft device. is part of the standard equipment.
But the luxurious standard equipment does not preclude the possibility of further customizing the California according to one's own taste and needs: the accessories catalogue is the most comprehensive ever produced by Moto Guzzi.

High performance silencers. chrome-plated and machined components. saddles of all types and materials. as well as support and the App which turns an iPhone into a supplementary dashboard to obtain all kinds of navigation. performance and technical data information.
Special attention has been given to the chromatic concept. developed in two colours: white with dark decorative threads on the tank. inspired by the California Highway Patrol versions. or classic black with white threads. reminiscent of the original versions. such as the V7 and 850 California. 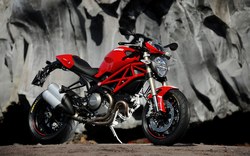