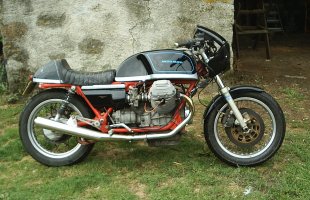 T3 base . engine converted to 950cc . LM spec . twin plug conversion . 36mm Dellortos on straight inlet tracts . extended sump . electronic ignition . alloy alternator cover . stainless silencers .  i've been told by a previous owner that the heads are flowed but cannot confirm this - i have ridden it and it certainly goes well . boss engine !
Suzuki GSX - R 41mm forks (Chris Clarke Motorcycles conversion) . seals need changing. converted standard Guzzi yokes . fork brace . Laverda Jota style adjustable handlebars . standard Guzzi clocks in non-standard console .
Akront rims on Guzzi hubs . standard Brembo P08 front calipers . Goldline P08 at rear . LM1000 swingarm allowing wider tyre fitment . retains centrestand and also has a California sidestand .  Koni Dial-a-ride shock absorbers .
Alloy fuel tank (very light) . original LM plastic fairing with tinted screen . modified original LM1 sidepanels and . i've been told . a Laverda SF750 tail unit . lockable storage compartment . leather seat pad .
In running order . new Gel battery fitted . needs carbs setting up as runs unevenly . all fluids will need changing also - rear brake not currently working .  UK papers in my name .
Bought as a project for myself earlier in the year but had no time to do anything with it so best moved on to someone who has time . not much money needed just time and effort . if i'd kept it i would have changed the sidepanels and probably the seat unit but all down to personal taste .
i'd hate to think what it would cost to build this now .
Bike is in France as am i . collection/viewing at Stafford Show 18/19/20th October recommended . possible collection from Plymouth if a deposit paid at Stafford .
No MOT and on SORN due to having been outside the UK for some time .
if unsold i will find time to do the various jobs through the winter and readvertise it for more money in the Spring .
More pics by request . 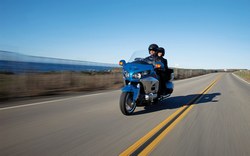