Seller notes: The bike has a few marks and scratches on bodywork wheels from use. 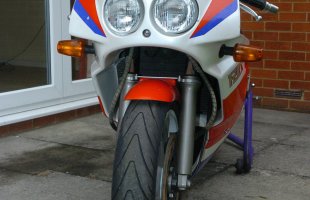 Owned by me since 1995. Japanese model. one owner in Japan before me. 21. 00 miles – see photo. The bike is a standard OW01 with Ohlins suspension.  Original engine rebuilt as a 1. 00 cc by Peter Day at 10. 00 mls; FZR 1000 barrels. Thunderace pistons and rods. Thunderace balanced crank. FZR 1000 head with OWO1 cams. Original crankcases and 6 speed gearbox. Akrapovic FZR 1000 exhaust (original goes with the bike).  Mitchelin Pilot Road tyres that are hardly used. new chain and sprockets + just serviced a couple of hundred miles ago.
Never raced. only road miles. Bike has never been crashed in my ownership and shows no signs of having been used prior to this as only had running in miles on when purchased. All original bodywork with a few scratches and marks now. together with holes for frame protectors that were attached when I got it. I left them on to protect frame and removed them for the photos to show that the frame is undamaged. These bikes are rare now and very collectable. This bike is not concourse but could easily be with not a lot of money. The only reasons for sale is I am moving and have to get rid of some toys. I also dont get time to use it due to my work commitments. This bike is priced to sell and someone will get a bargain. I will put 12 months MOT on prior to the bike being sold.