i only purchased this bike in september. but a major financial change has forced this very reluctant sale
this is the t100 "black" model. from the 2014 line up
it has only done 670 miles and has a full triumph service history (1st service at 500 miles. Mileage will increase slightly)
it's a super-cool looking bike. retro yet modern. and it features the following blacked out items: wheel rims & hubshandlebarsmirrorschain guardgrab railengine cases
triumph fitted extras:main standfly screenloud exhausts (originals included in sale)
non-triumph extra : black grab rail with luggage rack (see photo. both original & extra are included in sale) to be able to mount luggage
only 60 of these were made. i have the only one in wales. they massively underestimated the demand for this model - it has sold out across the dealer network (source = triumph cardiff)
there will be no more until 2014
total cost of extras = £750
there is no hp or finance owing on the bike 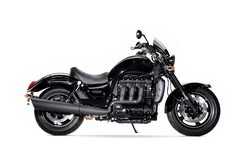