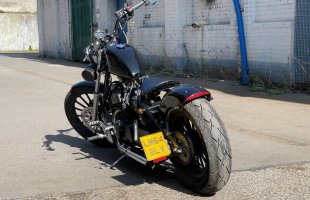 Reluctant sale of this absolutely awesome little machine.
It's a proper, full-size hard-tail custom style bobber with a learner legal 125cc inline twin engine that's only done just over 700 miles!
Design is very much like a classic Harley Davidson.
Looks way better than any other 125cc attempt at a bobber or cruiser style bike - and you most likely won't see another. It gets loads of questions and admiration wherever it goes.
The seat doesn't have those crappy little springs under it, it has a proper mono shock so while the bike's a hard-tail, there's still some suspension for you - it's not a spine destroying machine.
It's been customised a little in all the right ways and all the right places but the overall bike and engine are stock.
The first owner bought the bike new, rode it for only 14 miles and then kept it in their shed for 3 or 4 years until the last owner bought it in 2018.
I picked this up with the intention of further customising and possibly an engine swap at some point but I'm not getting the use of this due to owning other machines (I'm a full A licence holder), I'd rather make space and it go to a good home where it'll get the use it deserves.
Nice, fat rear tyre - it's the same width as the one on my Ducati Scrambler 800!
The bike looks incredible, really, really cool bike that sounds as good as it looks.
This bike is really rare, I've never seen another on the road and with decent twin discs up front this could definitely handle a bigger engine if you fancied making an absolute beast of a custom bobber like I originally intended.
Engine is a peach, inline-twin 125cc engine, very much like the Honda Rebel had. Sounds really good for a 125cc bike.
HPI Clear (Reg: LM64 BLV)Very Rare Bike - Believe only 36 ever registered in the UKNew Metzeler ME888 Ultra Marathon Tyres (Excellent tyres, way, way better than stock)Brand new batteryBrand new NGK Iridium spark plugsBrand new 20” 52cm Harley style side exit exhaust mufflersBrand new bar-end mirrorsOriginal documentation included with V5 & all MOT's2 Sets of KeysLED "Halo" Headlight (Looks great and really lights up the road)Under Fender LED Tail LightSide Mount Aluminium number plate (yellow/black and black/silver plates included so you can swap/choose)Re-located "Bullet" Indicators (Tidy & wired through frame)Chain and Sprockets are like newHeadstock re-greased and adjustedRecent Oil changeRecent brake fluid changeNew Petcock, Black aluminium Fuel filter & Fuel HoseLeather tool rollFiller cap O-ring replaced (last MOT advisory)MOT Next due 15/01/2023It'd done 675 miles at last MOT, now just over 700 so no reason to think it won't fly through the next one.
I've also added a custom matt-black tank decal that I designed and cut myself - gives it a really cool black-on-black look but can easily be removed as it's only a vinyl decal.
Previous keeper had it garaged, I've kept it inside my unit so it's never been left out in the weather.
The original owner didn't store the bike very well so the chrome has suffered a bit here and there and the chain guard also has some paint flaking - other bits of paintwork aren't perfect but it doesn't detract from the overall look of the bike. It's not a new bike so don't expect perfection.
I planned to shorten the tail section a little, relocate the speedometer to the side of the tank and relocate all the electrics into the fake oil tank - this would make the bike look even more custom (IMHO) but all of that's up to you.
This is probably the cleanest example you will find and they don't come up for sale very often due to the rarity of them.Very unique bike & ideal town cruiser.
Parts are still available and pretty cheap from AJS so you can get whatever you want if you feel the need.
This is a private sale and no warranty or returns are implied or given.You're welcome to come and view the bike here in Sheffield before the listing ends, just let me know.You're buying the bike, not coming to haggle and kick tyres!
No test rides.Bank transfer only - No cash or cheque accepted.I won't ship anywhere and I'm not stupid so don't ask silly questions.I'm not desperate for money or in a hurry to get rid of the bike so don't make stupid offers, the bike's worth every penny but I am possibly open to a little negotiation.Mileage might go up a little bit (only a few miles) as I'd like to take it out before it goes off to a new home.
It's a very cool, very rare bike with all the little mods and work already done, there's hardly any miles on it so it is priced accordingly.