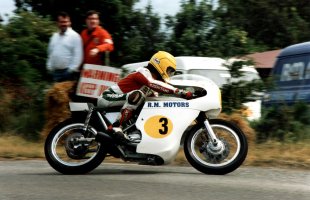 This Seeley was built in the early 90s by R M Motors for Joey Dunlop to ride in selected Classic Races; the picture shows him riding the machine in the Skerries races in 1994 as a 500cc. Other commitments then prevented Joey from having any further races on the machine and the bike was lent to Danny Shimmin to ride who rode it with various size engines fitted. a 350. 500 and a G50 engine bored to 650 cc. It was on this bike that Danny lapped the Isle Of Man at 105 mph in the 1997 Singles race finishing 5th at an average speed of 103. 42 mph.

The above picture shows Dave Croxford riding the bike shortly after its restoration.

I bought the machine in 2010 and have competed on it at Aintree and the Pre TT classic races in 2011. 012 and 2013. finishing second in the Aintree Championship in 2011. and fourth the following two years. The machine is very reliable and has never failed to finish a race since I have owned it. I rode it in the Classic TT Lap of Honour this year being an ex TT sidecar racer.

The bike consists of a Mk 3 Tichmarsh frame built in 1994 and fitted with a 350 Ron Lewis Engineering motor. Quaife 6 speed box and Newby belt drive. the engine has had a recent complete rebuild by Jerry Kershaw and is fitted with a Molnar head Cosworth piston and titanium rod . Ignition is a Molnar mag and carb is a mk2 Amal.

The bike is ready to race or parade and comes with all spares sprockets etc and 3 exhausts 2 loud and 1 that meets present noise controls 3 fairings including original R M Motors one that is a bit battered but could be repaired lots of information etc. It is a joy to ride and for sale as 60 year old rider has decided to retire from racing.

The machine is strictly cash on collection; please telephone Eric Ammann on 07791215654 with any questions. The bike is located near Chester. 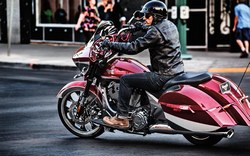