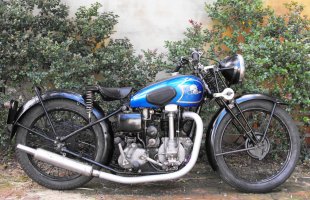 Selling for less than a common and probably non authentic Gold Star.

Original condition 1937 OK Supreme overhead camshaft OK Supreme Pilot. also known as Silver Cloud. The 2nd series overhead cam OK Supreme bikes are the rarest of Great Britain's fabulous overhead cam fraternity. One of only half a dozen intact cammy OK Pilot/Silver Cloud road bikes known to exist. One other. a 1935 model. was featured in Classic Bike about 8 or 9 years ago. Two more exist in Switzerland. A handful of others do survive but only in racing guise as the correct cycle parts have been unobtainium since 1939 when OK ceased motorcycle production. The highest known engine number is 360 (and they started at 101) so only 260 or so were ever built and that includes both 250s and 350s and in road. trials or race trim. These cammy OKs came out at the same year as the Excelsior Manxman and were considered their great rival although they failed to share the Manxman's great racing successes.

This particular bike was bought new in Tasmania in early 1938 and has had only 4 or 5 owners since. At one stage it was owned by the same person that also owned Sammy Miller's 4 cylinder supercharged AJS (yes. that came from Tasmania). This bike is authentic and in mostly unmolested condition when I acquired it earlier this year boasting the impossible-to-find duck bill guards. the cutaway petrol tank and cast aluminium primary covers unique to 1937 and 38 cammy OKs. My approach to the renovation was to conserve what was there in order to preserve its history. I dismantled. refurbished and rebuilt using all original parts. Nuts and bolts have been cleaned. threads restored and replaced with correct where wrong. I had to make a new battery carrier and tail lamp bracket as the originals were missing. I also had a new exhaust down pipe sand bent to fit in the time-honoured method. To my way of thinking this bike is perfect as it is as it shows all its history and retains its character. Should you wish to paint and chrome. its 100% there with everything in excellent order. However. you'll need to complete the wiring as the original harness is incomplete. Correct 8" headlamp. brass Lucas tail lamp. Altette horn. dummy battery and voltage regulator are there. Electrics the same setup as all late 30s Brit bikes with Lucas electrics.

The engine was found to be in generally good condition and still on standard bore. The bigend felt good and was not disturbed. The cambox required considerable work as all bushes were worn out and new bespoke ones had to be made. Gearbox is excellent with the pinions mint. Clutch is also in very good condition. The Magdyno was serviced and tested producing good results.  I would say the bike has done little mileage from new although it had been involved in a crash at some stage as the frame was bent and primary cases damaged. These have been rectified.

The photos show part of the refurbishment process. The valuation is based on its rarity. the value of its cammy contemporaries and that a road bike converted to racer spec sold for $35k at auction within the last two years. This cammy OK Supreme is a very rare and desirable British thoroughbred from one of the oldest of all motorcycle manufacturers and is one of a handful of British machines that qualify as a solid gold investment.

The bike is located in Perth. Australia. I have sold many British thoroughbreds I have restored to Europe and the UK inc Manxes. Inters. KSSs. pre war Goldies. Rudges and Excelsior Manxmen. As its an historic bike. the only import duty into Europe will be about £100. Airfreight to anywhere in the world approx £900. I will assist with crating and delivery without cost and pointing you in the right direction regarding forms and laws with your Customs people.

Check out my other items! 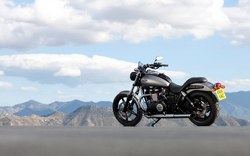