Seller notes: Very rare opportunity. Ten's of thousands spent already to get her to this position. Great project. 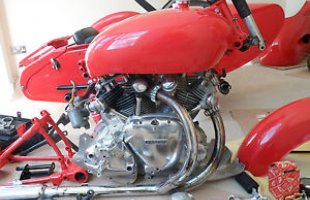 Sadly. I have run out of space and now my much loved project has to go.

This started life as an extremely rare 1950 Vincent Chinese Red Touring Rapide. Upper Frame Number RC62xx. This has been confirmed by the VOC. The chassis was imported into the UK from the USA around 2008. I have spent the last year getting her to it's current state and have spent many thousands in the process.

A little bit of history on Chinese Red Rapides:

In 1949 Vincent reached an agreement with Indian Motorcycle Company. for Indian to be their North American agent of Vincents. Indian were used to bright colours. fat tyres and heavily valenced mudguards and therefore requested something other than standard Vincent black. Vincent responded by building (in total) 97 Vincent "Chinese Red" Touring Rapides and then shipped them to California and Canada.

In 1950. 60 (of the 97) Chinese Red Rapides left the factory to the US. All had the heavy valanced mudguards. These mudguards are extremely rare now as many people whipped them off for the lighter alloy guards. This Chinese Red Rapide has an original set and look stunning now restored.

I purchased the sidecar separately and it is a Steib TR500. These sidecars were first manufactured in 1950 and were billed as the ultimate sports sidecars. I have spent a small fortune getting the Steib into it's curent state. All upholstery has been totally refurbished/renewed by a professional coachbuilder and the entire body has undergone a complete professional renovation right back to bare metal and she was then finished in the glorious Chinese Red. There are a couple of minor jobs required to finish (boot clasps need sourcing and refixing and suspension needs fitting). The frame and all other paints were stove enammelled black and she comes with a new tonneau. You can still buy these sidecars as replicas for around £6. 00. originals command very high prices. Check out US Ebay. There are two for sale and both require restoration (Ebay numbers 271364847165 and 271364288311). One is $6. 00 and the other is $3. 00. The Steib TR500 is correct for the period and many Vincent twins are fitted with them. The Red Rapide will look amazing with this attached.

As you can see from the photos. I have also had an Avon Dustbin fairing restored and painted in the Chinese Red. this fairing was previously connected to a Vincent Rapide. Same with the Craven panniers and rack too. I was essentially trying to build the ultimate touring Rapide.

The engine is around 85% complete with many new parts. Valves and valve springs are fitted already. Magneto is correct and has been reconditioned. Crank and clutch look unused. Twin carbs are correct. Mainshaft and layshaft for gearbox are prsent but no gears. Some timing gears. as you can see from the photos. All outer cases present and look beautiful. No engine numbers on the crank cases. The original engine for this exact model is still in use by a VOC member in the USA - shame. but if I had the correct original engine then the price would be double!!

Forks are correct and original Girdaulics and will need restoring.

Wheels will need rebuilding but to be expected.

Essentially. what you see is what you get. Most of the parts that are missing are minor and easy to obtain from the VOC.

Red Rapides are not far off the Holy Grail of Vincents but despite that. they are stunning bikes anyway. A few have gone through Bonhams recently:

I would be willing to consider a part ex with a British bike that I can move around easily with cash either way. My main issue is storage at the moment.

Vincent's represent an amazing investment and certainly far better than money in the bank!!

I have been a member of the VOC for a number of years.

No messers please and only genuine enquiries.

This Red Rapide was part of the second batch of Reds to go to the USA with engine numbers in the 43xx range and frame numbers in the RC62xx range. In addition. Red Rapides were hand sprayed as opposed to the Conventional Black Rapides that were essentially dipped in a vat.

I have just found a fascinating article relating to the restoration of the Chinese Red Rapide which is 2 numbers away from this one. Www. thebikersgarage. com/featured-bike-ron-stuparts-chinese-red-vincent-rapide/ Apparently only 30 Reds left making it possibly rarest production Vincent ever. Great article.

Bike was Originally dispatched to Indian Sales Corporation in San Fran in July 1950.

Vincent Rapide for sale
1950 US 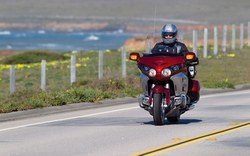