This is not a restoration - it is a brand new "old stock" bike!!

This is as close to a new bike you will get.   It has provenance history etc  It is proper. unmucked about it will stand any test - worth every penny!!  Static indoor display for many many years . Started and running about ten years ago . Letter from Bacon who wanted to photograph it for his book .    8 inch front brake megaphones WM2 Rims Silver Alloy tank.

Purchased as a new and unused BSA about fifteen years ago at Sotheby's. It was the Sotheby's Road show Bike in the late eighties. and authenticated by Mike Jackson. who had the BSA fraternity crawl all over it. It spent time in a Scottish Museum and owned by ex racer James Brown  who loaned it to the Museum.   It also appears to have passed through hands of Johnny Draper. though I don't recall exactly what he had to say when I enquired .   Because the bike has never been registered. it's quite difficult to check its history.   Absolutely standard and original.    I made all necessary enquiries when I bought  it.   It had been internally dismantled  to stop the bike being started when on display as people "tried to kick it over" .   I remember making a very large number of phone calls trying to trace the bikes origins. I contacted a number of BSA bike shops that owned it in the seventies. No one ever ran it. as everyone thought it would "spoil it" and that it should remain "unrun".     It was clearly identified by one dealer (Reg Allen in Hanwell) who asked me to lift the tank off and examine it for "Welding marks". He told me it had hung off the ceiling of his shop for several years and that one day the tank or bike was dropped . damaging the tank. To get the dent out. they had cut a hole in the bottom and rewelded it.   and no. he had not run it either!  I  had it recommissioned by Rex at Victory Motorcycles who said he had never heard a "New Goldstar". and it was impressive.

Bill. AKA “Victor Man” tells us he had this bike in the 1980's around 83. 84 Apparently he  paid 2. 00 pounds for it.  He bought it from John Hardon in Barrow in Furness.  He bought it as a new bike and sold it as such. Victor Man seemed to remember it came with a spare exhaust and a piston.  He sold it on into the trade. a guy called Ken Newby now deceased and he sold it to a guy called Ricky Johnson. who is still around.  He knows Ricky.  He sold it to some guy in Scotland who put it in a bungalow as a static display. (James Brown?)  From there it went to a museum followed by  Sotheby's and it became the Sotheby's Road show bike in the 1990s  Victor man remembers seeing it at Rex's Victory motorcycles in Camden when we sent it there to get running and replace the perished bits on it. Since then it was on my office wall for many years and then moved to a heated garage where it has simply sat unloved. Pay a good price and I will deliver to Rex at Victory motorcycles for fresh oil and fuel so all you have to do is take it home and get polishing.

Herewith Engine and work details as last carried out  some years ago .

Bike has scratches on exhaust. (where kick start has caught it . and boot marks as well as blueing on exhaust from when bike was running.   Cut out under tank where repaired but other than that almost as brand new (but dusty) incl rubbery bits on tyres.    It has never registered :  To the best of my knowledge. no one else had ever run it.  It needed quite a lot (rings compressed seals leaking etc)   It had the following done about ten years ago :  New Cables. clutch engine strip down. New clutch. valves. seals. new piston rings. carb slide and all small moving things .

Pick up / collection in Central London - please send phone number if you have any queries /questions etc. 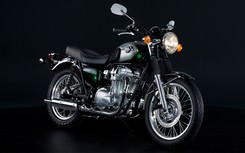