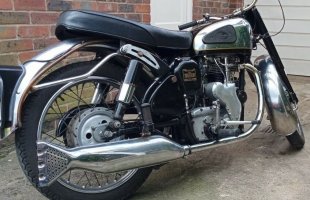 I took this down as I found a partially blocked hollow bolt on the inlet valve chamber drain and read something that said that this would make the exhaust smoke, fitted a good one and hoped to report back with good news (and a more saleable bike), not so, although with all of the riding around it does seem a tad less smokey.So it's back up again same deal as before and I will let it run to the end.
About September 1960I'm selling this as an unfinished project as my right knee is now too much of a problem.When I bought it it had been in storage somewhere and had been covered in yellow metal preserving grease, I have some photos of the original condition. My plan was to build it and get it going in the condition it was in and ride it as an oily rag.This took a replacement magneto, overhauled speedo keeping the numbers and mileage of the original, some clutch parts, all new cables, wiring loom, seat, a few dynamo parts, a DVR regulator, (this can be connected as 12 volt), some carburettor parts, lights, horn etc. My total spend is greater than the bikes value.I also found a replacement cylinder as the original had a broken fin, bought a +.020 piston and rings and ran into problems. I think I messed up somewhere and managed to glaze the bore as it smokes, I thought it wasn't scavenging properly so fitted a new oil pump and drive worm - no change.It starts ok, the clutch is fine and I have ridden it 28.6 miles. it rides nicely but smokes like a 2 stroke so needs the cylinder off again and sorting, everything else is great, it handles nicely considering the ancient tyres and makes good power for a 350, it sounds nice too, no battery otherwise it's all there, even a smattering of original Rubery Owen bolts.There are a few spares to go with it and some receipts, books etc, and the registration number is original.Hone and rings or rebore... ride it as it is, or strip re-chrome, polish, paint, fettle, etc, either way you will have a nice bike.I might be interested in a deal with a very late carburettor Fireblade as long as it is not red white and blue. 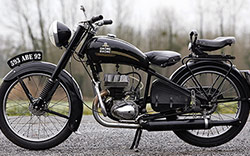