Thruxton was imported from the States around 15yrs ago, originally black and being my 3rd black Thruxton, one of which I still had at the time, I changed this one to silver and black. I began a ground up rebuild around 5yrs ago and sold the black one. The purchaser immediately stripped, checked and reassembled the bike which was also the case when I sold my first Thruxton many years before. This time, as I intended to sell, after stripping the bike, powder coating, replacing necessary parts, I assembled mostly to finger tight to enable a purchaser to easily strip and inspect.
Some health issues including knee replacements slowed progress significantly and made it quite obvious that kick-starting a 500 single would be out of the question.
So here we are and it's up for sale. 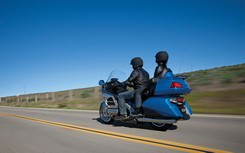