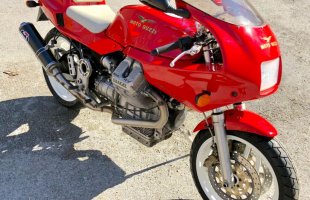 922 Miles and never registered, comes with MSO and original Bill of Sale. #24 of 691 produced, factory options include ‘long tube' intakes, Termgnoni exhaust and competition chip. Original purchase price $13,660.
“The Moto Guzzi Daytona was always the pure, no messin' about, Dr John race replica ... there's a brutal elegance about the Daytona and true collector value.” In a private collection since new, it has never been registered and comes with MSO. (Factory original documentation, not title). Stored in a humidity controlled garage since new, it has not been run in a few years and will require service prior to use.
Happy to assist and questions are invited.

Learn more about the model and Dr. John Wittner read below:
Motorcycle Classics - June 2013 - Under The Radar Article:
After his team of modified Moto Guzzis won the 1984 and 1985 U.S. Endurance Championship and the 1987 Pro Twins series, U.S. Moto Guzzi guru Dr. John Wittner was summoned to Italy and asked to help develop a new world-beating superbike.

After his team of modified Moto Guzzis won the 1984 and 1985 U.S. Endurance Championship and the 1987 Pro Twins series, U.S. Moto Guzzi guru Dr. John Wittner was made an offer he couldn't refuse. Summoned to Italy by Guzzi godfather Alejandro de Tomaso, Wittner, a former dentist turned endurance racer, was asked to help develop a new world-beating superbike. Guzzi revealed a prototype at the 1989 Milan show and named it for the famous Florida circuit (where they won the 250-mile endurance race in 1985), but in typical Italian fashion it took until late 1991 for the Daytona to go into production.

Although the hot rod Daytona engine was based around the classic “big block” air-cooled Moto Guzzi transverse V-twin, in the end it retained only the crankshaft and crankcases of the standard engine. Using the 78mm stroke of the 948cc Le Mans 1000 combined with new plated alloy cylinders with a 90mm bore, it displaced 992cc. A bright red sport fairing melded into the gas tank just above the Daytona's all-new cylinder heads, grandly marked “OHC 4V” for overhead camshaft 4-valve. In truth, the cams were carried high in the cylinder heads, not on top, so the engine could also be considered a high-cam design overhead valve.

From the crankshaft, a reduction geartrain drove a pair of toothed belts, each spinning a single camshaft in each cylinder head, which in turn opened four valves via short pushrods operating rocker shafts. Fueling was by Weber-Marelli electronic injection, and the exhaust system was in stainless steel. The engine drove a revised version of the 5-speed transmission used on most Guzzi twins through a beefed-up clutch (with 10 springs versus eight) and a driveshaft to the rear wheel.

With a claimed 95 horsepower available at 8,000rpm, the Daytona was the most powerful road-going Guzzi to date, returning a top speed of 145mph. “The result is excellent rideability, with big-time low-end and midrange power available whenever you open the throttle,” Cycle World said of the big twin in 1993. On the road, they found that being long and low in Guzzi tradition gave the Daytona reassuring stability at high speeds: “The Daytona proved unflappable, with well-damped suspension, plenty of cornering clearance, premium tires and a relatively flickable yet very stable nature.”

Those same characteristics, though, meant it was less nimble than some lighter and more compact motorcycles of the time. “The Daytona is less track-ready, more of a traditionalist's GT-class machine,” Cycle World said, adding, “The Daytona shines by excelling everywhere and not doing anything wrong. Its suspension offers a good balance of compliance and control … though the bike does turn more readily to the right at slower speeds thanks to the engine's pull-to-the-right flywheel effect.” They were impressed by the absence of driveshaft-induced handling quirks, noting that “mid-corner throttle changes have almost no consequence whatsoever on the chassis. If anything whacking open the throttle while leaned over makes the rear end squat slightly, just like a chain-drive bike.”

But Daytonas aren't without their issues. The timing gears are noisy and have been known to fail as have timing belts, which must be replaced regularly as failure — from the belts or the gears — can result in serious engine damage. Further, harnessing the Daytona's prodigious torque means a heavy clutch pull plus extra strain on the transmission; it doesn't help that there is no cush drive in the driveline. Gearbox oil should be changed regularly to help keep the gearbox happy, and the magnetic drain plug checked for metal fragments. The Daytona's bevel drive case is unvented and blown oil seals are not unknown.

Overrall, though, Cycle World concluded that the Daytona was “a polished and thoroughly updated version of a machine many had left for dead … there is no more charismatic motorcycle on the market today,” and 20 years later, that statement still rings true. Limited production (there were just barely more than 1,000 built from 1992-1995) means finding one requires patience, but the rewards are clearly worth the wait.

Who was Dr John Wittner: (Please note - description below is NOT OF THIS SPECIFIC MOTORCYCLE)

Thirty years ago in 1988, Moto Guzzi's hi-cam, 4-valve-per-cylinder engine made its public debut in the U.S. Battle of the Twins competition, finally reaching production for customer sale in 1992. The saga of American dentist Dr. John Wittner and his Moto Guzzi racers is a motorcycling fairy tale that put the mercurial Italo-Argentinian Alejandro De Tomaso, then owner of Moto Guzzi, in the unlikely role of a fairy godfather.

In his spare time from dentistry, Wittner had played with tuning Harley-Davidson engines, mainly for road racing around the northeast. But in 1983 he decided to buy a Moto Guzzi Le Mans, if for no other reason than he thought it looked neat, and also had a pushrod engine like the Harleys he was used to. Trained as a mechanical engineer before taking up dentistry, Wittner appreciated the Guzzi's rugged engineering and traditional looks. "I bought the bike with the sole intent of forming a team of friends to go endurance road racing with it," Wittner says today, still living in the same suburb of Philadelphia, Pennsylvania, where he ran his race team. "I knew they were extraordinarily reliable, the perfect weapon for Endurance competition."

In its first year of competition, Dr. John's team won the 1984 U.S. Endurance Championship's Middleweight class, with a 100 percent finishing record. The following season, in 1985, after Wittner sold his dental practice to concentrate on bike racing, Dr. John's Guzzi team won the overall 13-race U.S. Endurance title outright, beating a fleet of Japanese Honda, Suzuki and Kawasaki that were occasionally slower and always thirstier than the pushrod V-twin, a fatal combination in long-distance events.

The next year, Wittner's fortunes slumped as he looked further afield for new challenges. The lack of suitable races outside the U.S. where he could race the Moto Guzzi in 1986 meant he hardly raced at all, and his money was fast running out. Almost flat broke after two seasons, Wittner took a final, desperate gamble. Staking everything he had left on a one-way air ticket to Italy, he camped on the doorstep of Moto Guzzi boss Alejandro de Tomaso at his private hotel in Modena — and got lucky. "I went with the intent of staying two weeks, but got so involved that I didn't return home for two months," Wittner says. "One December morning, I woke up and remembered I'd left my car in the airport long-term parking lot. It cost me a fistful of dollars to extract it!"

De Tomaso recognized in Wittner the man who could help rejuvenate Moto Guzzi's staid image, and when Wittner returned to the U.S. he had a box of business cards identifying him as Moto Guzzi's "Engineering Development Consultant, North America" — plus enough money to build the Stage 3 Guzzi racer he'd mapped out before his visit, complete with an all-new box-section spine frame and cantilever swingarm with floating shaft final drive. The rest is history: in 1987, in the hands of rider Doug Brauneck, Dr. John's Guzzi broke the six-year Ducati / Harley Davidson / BMW domination of U.S. Pro Twins, winning the AMA Championship title and becoming the most successful Moto Guzzi racer since the factory had stopped Grand Prix racing in 1957. De Tomaso was so delighted he gave Wittner one of the two prototype 4-valve-per-cylinder V-twin engines Guzzi engineers had been working on for the past two years to build a race bike around, to help Guzzi ready a production version. 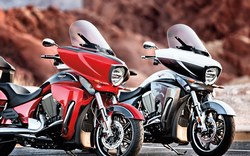